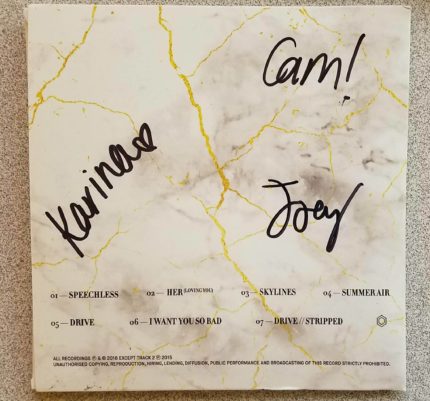 The first time I heard Karina Wykes sing was from the song “Passion” by Hillsong Young & Free (recorded live on November 15, 2015). I was already a big fan of both Hillsong Y&F and United, but when I encountered this song, I instantly fell in love, particularly with the vocals (melody, lyrics, and all).

I am usually very critical of musicians and singers, but that voice was everything I could ask for in a female vocalist. The emotional delivery captured my attention. Her control over dynamics was perfect. The overall vocal sound blended really well with the music. I wanted to hear more of her.

I eventually found out who she was and searched for other songs under her name. Of course, that led me to a short catalogue of GLADES music. I gave the group a listen, and (again) I instantly fell in love.

The music, songwriting, and singing blew me away. For more than a year, I cycled through half a dozen of GLADES’ songs on repeat for hours every day at work, not because I was picky but because that was all the music that they had available at the time. Every song was incredible. Each new release became a new favorite.

I followed them on every social media site possible – something that I never do (GLADES is actually one out of only seven accounts that I follow on Twitter, and three others are just Karina, Cam, and Joey). I waited a long time for them to do a U.S. tour, and when they announced that they were finally coming in September 2017, it was the chance of a lifetime to actually watch them live and meet the trio.

They are incredible professionals at what they do, but more than that, the three of them are such kind-hearted people. It was a pleasure for me to interact with them and hear their stories.

I believe GLADES is here to stay, and I hope more people discover them and get to enjoy their music as well.