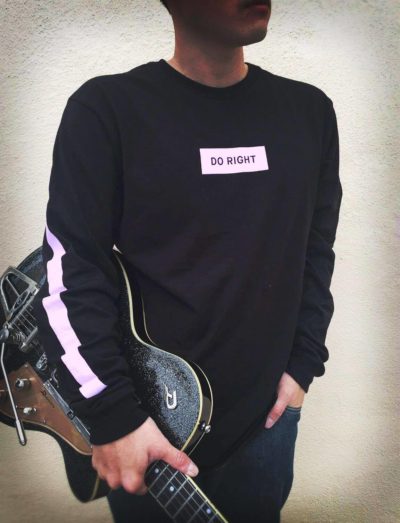 When I listen to GLADES songs, it feels like Cam and Joey are very intentional with each instrument and sound. Every riff, sample, percussion, or other musical element is placed in its spot with purpose. The duo also takes care not to overcrowd any section of a song. Every arrangement is well balanced and easy to listen to.

Since I am primarily a guitarist, I tend to notice the guitar parts more readily (and thus might comment on that more). I really dig Cam’s pedalboard(s); a lot of work must have went into crafting such clear and melodic tone. “Drive,” for example, has just the right amount of reverb, delay, and fuzz to blend with the rest of the music so that you don’t really notice it, unless you pay close attention (listen carefully to all the chord strikes in the last verse and the solo at the bridge; it’s very rich).

Their drums style is very unconventional, which I appreciate. The subject matter in GLADES songs typically warrants slow jams or mellow tracks, but instead, the drums are going 16th notes on the hi-hat with lots of kick, pushing the limits of the moderately tempo-ed songs (such as “Falling Away”).

I personally like their approach to vocals. Whenever the band opts out of harmonies, Cam comes in to sing the melody in a lower octave along with Karina. This style of backing vocals adds a small layer of depth and complexity, without too much interference. It’s just enough, where I am still able to focus on the singing and the lyrics, simultaneously.

Finally, something I really enjoy is the sampling and synths. I believe these give each song the GLADES signature sound (compare their cover of Fools with the original). Every song that the band releases has plenty of earworms that are addicting (like “Do Right”). I sometimes even find myself humming the vocal samples instead of singing the lyrics. So catchy.

Overall, the trio works so well as a band; it’s obvious in their music. The way that they collaborate and build on each other’s ideas. The truth and honesty behind each note and lyric. The commitment to their own style and art. The end-product.

I wouldn’t want GLADES any other way.