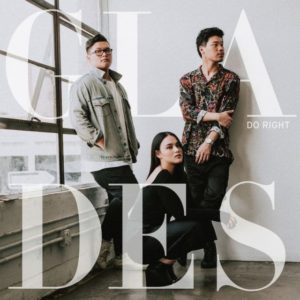 We play this like a game
Why do we pretend
That we were never friends?
When we both haven’t changed
Enough to just forget
The windows we broke with another
The secrets we spoke

“We wanted to spread a message of love instead of hate. This song is about loving those around you and how treating people with love creates more love.” – Karina

Some say that everything in music has already been done, and there’s nothing left that’s new. This song seems to disprove that.

“Do Right” is a unique blend of ideas that reveals the depth of songwriters’ creativity. Without any context, the composition itself is packed with a lot of different music and sounds, yet nothing is overdone. For me, there is just enough build-up, suspense, and novelty throughout the track that keeps me engaged and excited. The entire arrangement follows the Ab Bb Eb G chord progression, laid out by the bass. All of the instruments create a catchy ensemble, where each element enters and exits the song as if they were all taking turns (guitar riffs, water droplets, shimmer effects, hi-hats, synth, bongos, etc), accompanying the back-and-forth partnership between the vocal samples and Karina’s vocals.

The melody is likely the best part of the song – very groovy and constantly moving along the scale. Karina’s singing style shines as her voice effortlessly travels throughout the track. Additionally, the sound engineering is incredibly impressive. To be able to fit all of this content into one solid mix and still allow the vocals to shine on top of everything – that is professional mastering.

Beyond the 3:14 track, the song has so much depth. “Do Right” was actually composed under completely foreign circumstances. In June 2017, the band took a trip to the United States for the first time, and during this period, they felt disheartened to see so many tragedies around the world and people’s painful reactions and conflicts with each other. Their empathy inspired the subject for this song, and they went ahead and wrote “Do Right” during their stay in New York. Keep in mind that prior to this, every other song they had written and released mostly revolved around romantic relationship/heartbreak. Essentially, the band uprooted themselves temporarily to a foreign country and formed lyrics on an outlier topic, while holding true to their musical style and roots. If this isn’t a testament to outstanding, professional creativity, I don’t know what is.

Overall, this is a balance of everything. Groovy beat with dozens of different sounds.
Serious subject matter sung with catchy melodies. Relatable and reflective; fun and danceable. The song was probably played live a little more than a handful of times, but somehow all GLADES fans globally anticipated its release for months, even demanding it all over social media during the “Keep It From You” and “Love You Better” periods.

How can a song that’s this short possibly do this much stuff?
Simply amazing.

• The band wrote “Do Right” in New York, during their first U.S.A visit.
• The song is a message that reminds us to treat others with love, despite the crazy world around us.
• ARIA Gold certified